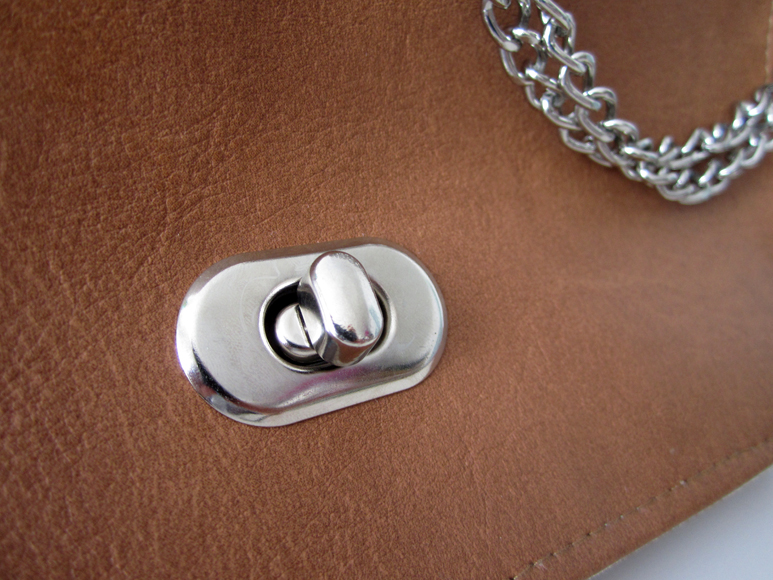 Installing a twist lock is much easier than one can believe and gives a professional and sophisticated look to your bags.

The twist lock can sometimes replace a magnetic clasp. It would fit the look of the Ava bag for example.

How to install a twist lock tutorial

The twist lock (with prongs) used for this tutorial will be installed on a clutch (simplified version of the free Cachotin pattern).

The twist lock with prongs has 4 pieces  :

The twist lock with screws has 6 pieces  :

The female half (front and back plate) of the twist lock is installed on a moving part: the flap of the bag or the flap of a pocket. This flap should already be finished : fabric and lining pieces of the flap sewn together and turned right side out (it may even be already basted to the bag).

This type of lock has a significant weight and must be installed on heavy weight fabrics. It is advisable to interface the fabric pieces on which the lock will be installed.

Installing the female half of the twist lock

Center a plate on the placement marking on the flap. Make sure the plate is horizontal.

If there is no marking on the pattern, place the plate where you want to install the lock. Make sure that this area of the flap will overlap with the body of the bag where the twist button will be installed.

Twist lock with PRONGS : Trace the inside perimeter of the hole.

Twist lock with SCREWS : Trace the inside perimeter of the center hole and the holes for the screws.

Connect the lines. This new outer line is the one you will cut along at the next step. 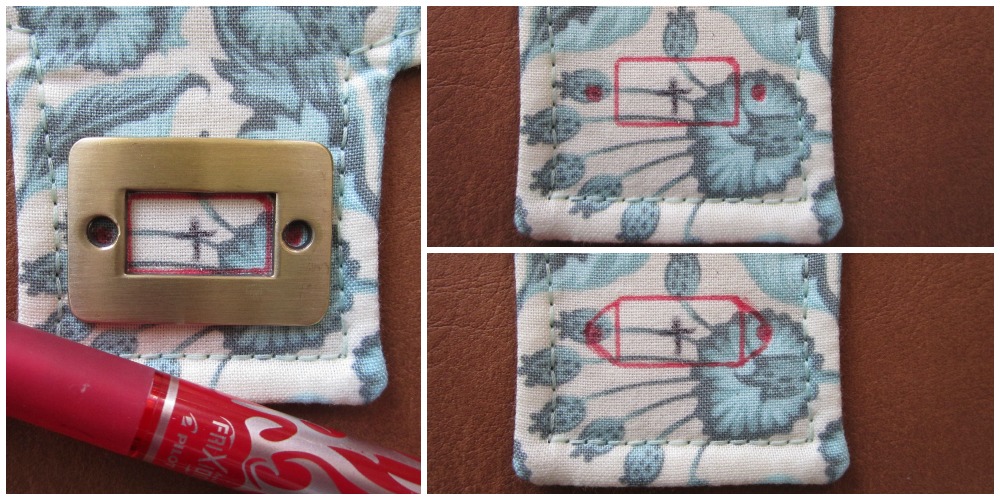 With embroidery scissors cut a cross in the middle of the oval marking, cutting through all layers. Then cut out the area, cutting 1 to 2 mm outside of the line.

Place the front plate on the fabric side of the flap, sliding the prongs through the hole.

Place the back plate on the lining side of the flap

Fit the two plates together and spread the prongs apart over the back plate.

Tip if once assembled the plates of the twist lock are loose:

Place the front plate on the fabric side of the flap.

Place the back plate on the lining side of the flap. Install screws.

Installing the male half of the twist lock

Installing the male half is done the same way whether the twist lock has PRONGS or SCREWS.

If there is no placement marking on the pattern, position the flap properly over the bag body and make a mark at the center of the twist lock hole.

Centre the washer over the placement marking and mark the two notches.

Using your seam ripper carefully and gently nick through the two notches.

Slide the prongs of the twist button through the notches, toward the wrong side of your fabric.

To further reinforce the area, slide a small piece of ultra firm stabilizer through the prongs (Jeffytex or Pellon 70 Peltex).

Slide the washer through the prongs, over the stabilizer and fold the prongs toward the center.

Voilà, you know how to install a twist lock!

You can now sew the lining to the bag body.

2 thoughts on “How to install a twist lock tutorial” 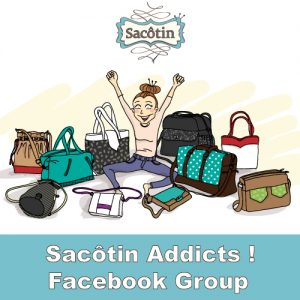